RVs produce energy in different methods, and there are a variety of ways to choose. However, they require external power sources to be recharged and store energy. Alternators on the RV engine or tow vehicle provide some power to most recreational vehicles.

For recharging, many RVs feature solar panels on the roof. Many RVs also include a generator, which operates on gas, diesel, or propane and provides 120-volt electricity, essential for running the appliances in the RV.

As the only power source for an RV, a generator serves as a kind of safety net. What makes an RV self-contained is its ability to store food, water, and other supplies. For those times when your batteries run out, and you’re not connected to shore power, you may use your generator instead. As long as it has fuel, it will supply AC power instantly and reliably. Battery life can also be restored.

Certain RVs come with built-in generators that can run energy air conditioners on their own. If you don’t already have one, you can use a portable generator as a backup power source. Additionally, you may run more than one at a time if necessary.

As a starting point, let’s take a look at what’s available. It is common for manufacturers to rank generators based on the number of watts they produce. In other cases, kilowatts may be used instead.) As a rule, RV generators operate in the 1.5-to-4-kilowatt range.

In other words, how many watts would you require? Although you won’t be using your RV generator to power all your appliances and accessories simultaneously, you should know how much power each one consumes so you can adjust your generator accordingly.

Two thousand five hundred watts is a lot of electricity for an electric range and water heater. A refrigerator, on the other hand, consumes 600 to 800 watts.

Know these statistics so that you can choose the right size generator for your RV lifestyle.

Some of the RVs come with built-in generators. You may securely use them during transportation since they draw straight from the fuel tank or burn propane, and they are safe to use. These devices may also be programmed to automatically switch on and off or integrated into your home’s wiring system. A typical size is at least 3,000 watts and may reach up to 12,000 watts.

Factors to Consider When Choosing an RV Generator

When picking a generator for your RV, wattage is only one element to consider. In addition to the size of the generator you require, consider the following: Due to its insulation, inverter-style generators are generally quieter. When used with older generators, it’s meant to mask the unpleasant whining of the old generators. A decent noise rating can help you keep your neighbors happy and calm. It would help if you also observed the “silent hours” wherever feasible.

And in case that your RV is powered by diesel, it makes sense to acquire a generator that is powered by diesel. There is no need to carry around an extra gasoline container or make a second trip to the gas station in this way. In the same vein, let’s not forget about gas.

Propane is another choice, which many people prefer over gasoline and diesel fuel. While some want to save it for future use, one of those others. “Dual fuel” capability is available from many manufacturers and is ideal if you want a little bit of both gas and propane in your vehicle.

Weight and wattage should be considered. According to the previous discussion, lower-powered generators such as 2,000 and 2,200 watts are pretty popular. Single-handedly moving them is simple, and your RV’s equipment won’t be overly stressed.

A recreational vehicle’s price is an essential consideration when purchasing one. The costs of RV life may rapidly pile up, and you’re probably keeping a close eye on your finances. An inexpensive generator might wind up costing more in the long run if it is not replaced.

The Sizes of Portable RV Generators

2,000 to 4000 watts is the standard size for portable generators, even if they can go up to 12,000 watts. In some instances, more significant is better, but it also implies more weight, more inadequate fuel efficiency, and more noise. Unless it’s essential, no one likes to load up their RV with unnecessary weight.

Although conventional-style generators are the most powerful and cheapest, they should not be your first choice for an RV since they are noisy, less fuel-efficient, and prone to power spikes.

Compared to typical generators, inverter generators are more efficient and quieter. Their voltage and current are also controlled by microprocessors, preventing the damage or destruction of sensitive electronic equipment, such as laptops and cell phones.

To operate an RV AC unit, what kind of a generator should I get?

A generator’s ability to operate the air conditioner is another important consideration when choosing what size generator you need to buy. For this reason, many RVs carry a backup power source for when the AC is required.

It’s a fact that RV air conditioners consume a lot of electricity. For an AC system, BTUs determine how many watts are needed. There is a difference between 600 and 1,500 watts for window-mounted air conditioners.

The size of your AC system will determine whether or not you can get by with a smaller generator, such as a 2,000-watt. This is possible to achieve as long as you aren’t attempting to power too many other things at once.

The fan and compressor of an air conditioner are powered by electricity. In some cases, the compressor kicks in and shuts everything down. If this happens, you’re running low on power.

Two smaller generators can be operated in parallel to overcome the problem in some instances.

To power a 30-amp RV, what size generator is required?

The electrical service in some motorhomes is 50 amps, but it is just 30 amps in others. Amperage and voltage variations may cause the RV to use more power. In general, increase 120 by amps to get the most energy (30). So, the maximum generator you may utilize is 3,600 watts. Even if it isn’t dangerous to use, you don’t need anything more vital.

To power a 50-amp RV, what size generator is required?

In the same way, 12,000 watts is the perfect number. However, it is possible to get by with a much smaller generator. Even if you run everything simultaneously, there is no way to use that much energy. More viable are RVs with four to eight thousand watts of power.

As long as you know the power limitations, you may use a 2000-watt generator to power your RV. Upon reaching its maximum output, the generator will shut down and cease to function.

With this article, you will have fewer questions about what size generator you should buy for your RV after reading. Prepare yourself for such an extensive choice by doing your research. No other method exists for determining what’s suitable for you in a particular scenario. 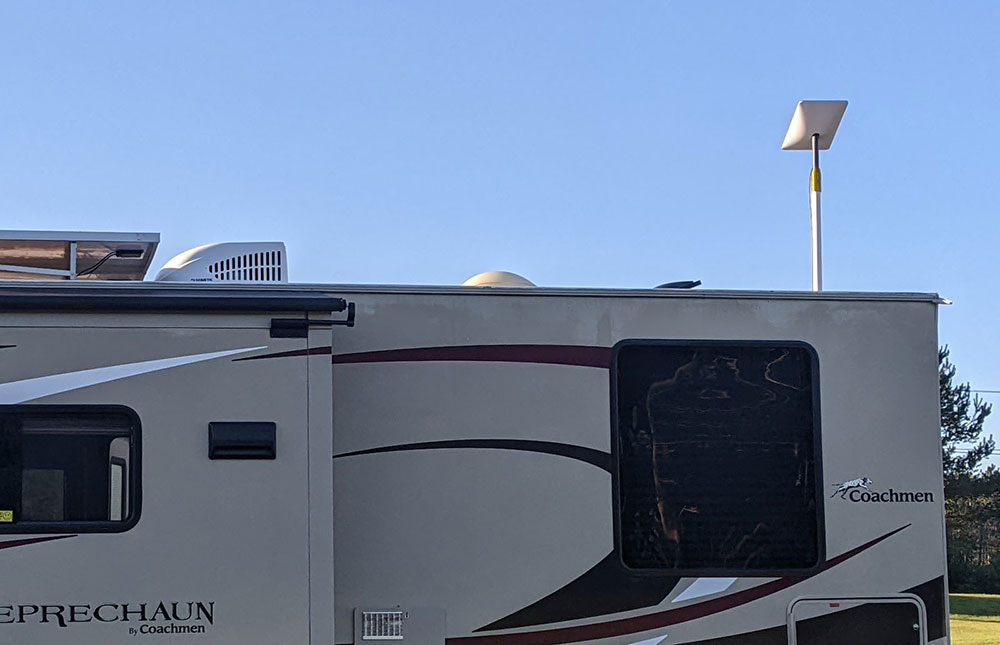